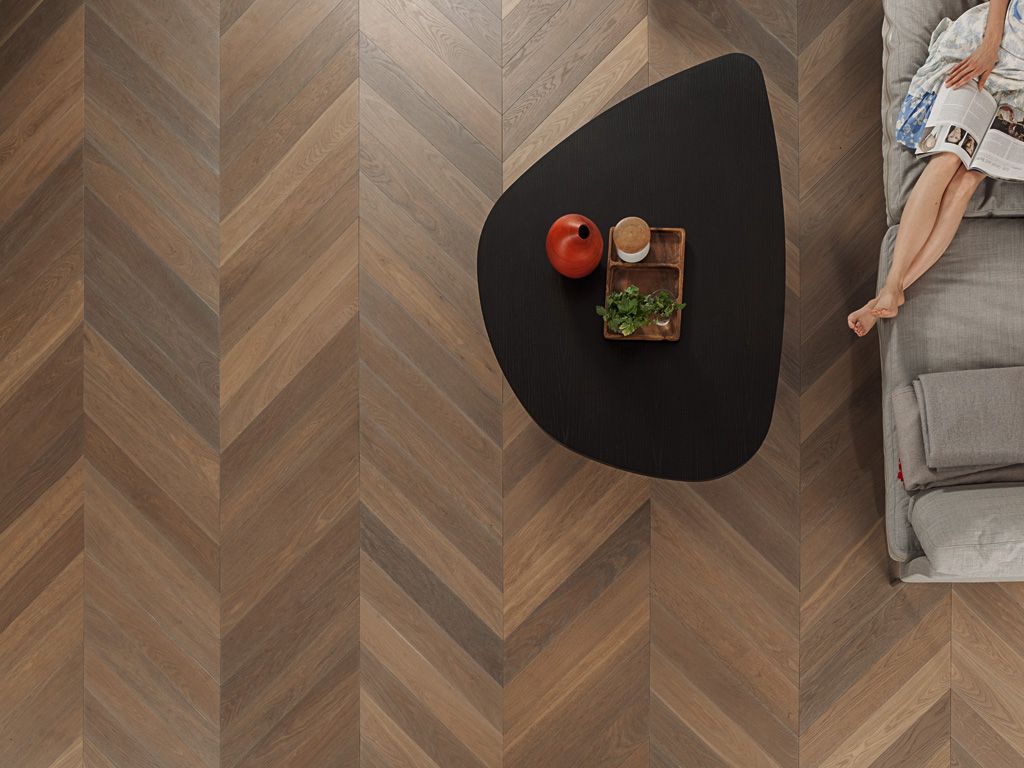 The classic herringbone parquet contributes significantly to the fascinating aura that old buildings exude. It is the small details, the loving design of days gone by, that cast such a spell on us in these buildings: Magnificent entrance staircases, high ceilings decorated with stucco, generous double doors and, of course, the noble parquet flooring. Especially the latter enjoys great popularity again today. It gives us the opportunity to integrate this special charm into less aged flats and houses as well. For you, we have created an exquisite selection of wonderful, versatile herringbone.

Herringbone parquet is considered by many to be the epitome of classic parquet flooring. Compared to the large selection of country house floorboards and long strips, the timeless wooden strips have often lost out in recent years, but now a clear turnaround is emerging: Herringbone is on trend! Whether in well-known interior design magazines, various TV shows or public, upscale buildings - the classic herringbone sticks are omnipresent. In urban and suburban areas, this parquet flooring is very popular - conspicuously often in old flats. Due to the noble appearance of the herringbone pattern, however, the wooden floor also creates a very special atmosphere in new buildings. Herringbone can also be wonderfully combined with modern living styles: Contrasts with glass and purist furnishings create a unique atmosphere. Grey, smoked and snow-white oiled herringbone strips are particularly suitable for this with their modern look. Those who prefer it warm and cosy can choose from a considerable selection of oiled herringbone strips with a natural colour tone, deliberately sorted knots and slight colour differences.

Due to the increasing interest, the range of different colours and formats is also growing. As a result, we can offer you a much wider range of colours than just a few years ago. Oak in particular lends itself to different surface finishes, which means that the colour selection ranges from very light to medium and dark brown to grey herringbone. There is also a wide choice when it comes to surface design: in addition to oiled natural woods, we offer lacquered, textured and natural staves in our range, either in a calm or wild assortment. In addition to oak herringbone strips, you will also find the noble walnut in herringbone form. With its elegant brown tone, it transforms light, high rooms into prestigious living areas.

The installation types of herringbone parquet

The increasing interest in herringbone parquet is causing a positive change in pricing: Recently, herringbone strips in a new construction type have become available at very attractive prices. If you have any questions about our parquet floors, our parquet specialists will be happy to help you. No matter which variant or colour you choose, with herringbone you lay the foundation for a timeless living ambience with unique charm.